The biggest concert piano in the world is located in Szymbark

‘Sign in’ into Book of Giunnessa Records took place on 30 December 2010. The biggest world’s concert piano is in Szymbark, and its size exceeds all the previously used instruments.

Its construction coincided with celebration of the 200 anniversary of the birth of Frederic Chopin.Piano is named “Stolemowi Klawer” and is covered with the sign of the Pomeranian Griffin. It has more than 6 m length, 2.5 m width and 1.87 m heights. It weighs 1.8 tons. 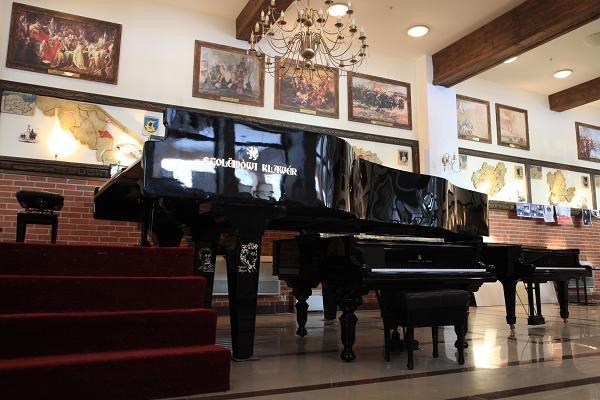 The biggest concert piano in the world is located in Szymbarku (photo http://cepr.pl/index.php/pl/zobacz-obiekty/43-najwiekszy-fortepian-swiata )

The construction of the instrument was supervised by piano-master Joseph Wolf from Kalisz. His design was modeled on the plate of Stainwey & Sons. Due to the size, it has a specially added bass strings. The piano was made ​​of different species of wood e.g. spruce, birch, pine and hornbeam.

Each of the six legs of the piano is decorated with portrait of great polish musician – Frederic Chopin, Moniuszko Stanislaw Ignacy Jan Paderewski, Mieczyslaw Karłowicz, Karol Szymanowski, Henryk Mikołaj Górecki. His public show in 2010, combined with the simultaneous beating of the record, was supported by a concert of Leszek Możdżer, Andrew Lauda and Roman Koperski.

Red. on the basis of cepr.pl