Grand and upright Pianos created by polish companies in nineteenth and early twentieth century can be seen in the permanent exhibition in the Museum of Industry in Opatówek near Kalisz.

They are survivors from many improbable situations e.g. from burnt Warsaw uprising or mansions and poor houses of the polish intelligence. Now collected in Opatówek’s museum and developed by prof. B. Vogel previously specialists from “CALISIA”. In total, they collected instruments from the first half XIX century, up to 1939.
In that collection can be found almost all varieties of the piano: vertical, rectangular, winger and upright piano. These instruments show the development of the instrument as a useful piece of furniture, ranging from common household tools, table or vertical (replaced by the upright piano). It makes possible to follow the evolution of decoration of pianos. Both of these items reflect the latest trends in fashion, which in the next century were replaced or reduced to a minimum by the requirements of mass production (e.g. unification). Collection of instruments also shows the evolution of design and technical aspects pf piano for over a century. 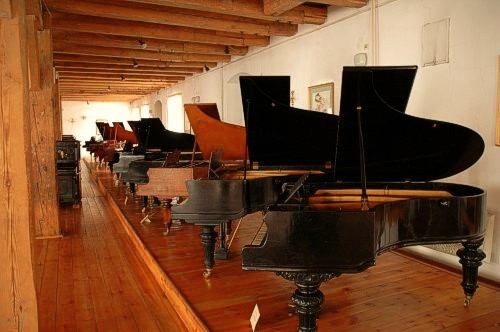 Source: www.muzeum.opatowek.pl
Transformation of instruments over the years were big :
“On the one hand, the instrument was bigger and more powerful, with numerous metal structural elements, capable to keep more than 20-ton of total tension of the strings and allows to “thunder” even in large concert halls. On the other hand, the mechanism of the piano was becoming not only more and more perfect but also more complex, requiring almost the master precision.
Centre Warsaw is represented by  well-known labels: Friedrich Buchholz, Anthony Hofer, Anthony Zakrzewski, Joseph Budynowicz, Krall&Seidler, Malecki&Szreder, Julian Malecki and  John Kerntopf and Son. Apart from these, rare instruments from smaller companies such as Gebethner&Wolff, Alois Kewitsch or Stanisław Kowalik. Equally rare are presented in the collection instruments of Józefat Golmera from Radom and Brothers Koischwitz from Lodz. The entire collection of pianos is completed by foreign companies e.g. the famous French pianist and manufacturer Henri Herz.” – prof. PhD Benjamin Vogel from University of Szczecin.
Red. on the base of information from Museum of Industry in Opatówek